These big game hunting seasons close at sunset on Sunday, Dec. 13. See the 2009-10 New York Hunting and Trapping Regulations Guide or www.dec.ny.gov/outdoor/28602.html for a map illustrating the specific boundaries and season dates for the Southern Bear Range.

“New York’s deer and bear populations are great resources for the state, and hunting is an important part of New York's outdoor heritage,” said Commissioner Grannis. “This fall marks the second year of the Junior Hunter Mentoring Program, and I encourage all adult hunters to participate by sharing their experience, outdoor skills and passion for wildlife with a young hunter.”

Late Archery and Muzzleloading seasons for deer and bear in the Southern Zone open at sunrise on Dec. 14 and close at sunset on Dec. 22. Hunters taking part in these special seasons must possess either bowhunting or muzzleloading privileges. During the late special seasons, hunters may use either of their bowhunting and muzzleloading tags, and may also take a deer with an unused regular season deer tag. Unused Deer Management Permits (DMPs) may also be used in the late seasons for antlerless deer in the unit for which they were issued.

In the Northern Zone, the regular deer and bear hunting season opened Oct. 24 and will close Dec. 6. This zone generally includes the Adirondacks, the Tug Hill Plateau, the Eastern Lake Ontario Plain and the Champlain and St. Lawrence Valleys. A late muzzleloading season for deer will be open in portions of the Northern Zone from Dec. 7 to Dec. 13.

Hunters should be aware of several important programs and recent changes as they prepare for the 2009 regular hunting season.
• Some Wildlife Management Unit (WMU) boundaries have changed. It is important that hunters review the new WMU boundaries since Deer Management Permits (DMPs, or doe tags) are only valid in the unit for which they were issued. The boundary changes also affect some season dates and bag limits and open areas for other game species. Check www.dec.ny.gov/outdoor/8302.html for boundary descriptions and revisions.

• DMPs can be transferred from one hunter to another, but a recently adopted regulation prohibits the buying and selling of DMPs between hunters. See www.dec.ny.gov/regulations/56325.html

• Junior Hunters (14 and 15 years old) can hunt deer and bear with a firearm when appropriately accompanied by an adult. See www.dec.ny.gov/outdoor/46245.html for program requirements and to download the Mentored Youth Hunter and Trapper Permission Form.

• New areas in central and western New York were opened for black bear hunting in 2008. The expansion was a continuation of efforts to manage bear population growth and range expansion. See http://www.dec.ny.gov/outdoor/28602.html for a map of the areas opening to bear hunting.

• Reporting harvested deer or bear is mandatory. Successful hunters may report via our online reporting system ( www.dec.ny.gov/outdoor/8316.html) or call the toll-free automated reporting system at 1-866-GAME-RPT (1-866-426-3778).

• Rifles may be used for big game hunting in Madison County, and new for this year, rifles may also be used in Schuyler County.

• Successful bear hunters are asked to submit a tooth of their bear to assist DEC with monitoring the bear population. See www.dec.ny.gov/outdoor/45598.html for instructions.

• Mandatory testing of all deer taken in the Chronic Wasting Disease (CWD) Containment Area will occur again this fall, as well as random testing in other counties throughout New York State. Additionally, there are restrictions on hunters bringing deer, elk or moose carcasses into New York from some other states and Canadian provinces. Specific guidelines regarding CWD can be found in the 2009-10 Hunting and Trapping Regulations Guide or on the DEC website at www.dec.ny.gov/animals/7191.html. Since discovery of CWD in two free ranging deer in Oneida County in 2005, no additional cases have been detected despite testing over 6,500 deer in the CWD Containment Area and almost 27,000 samples statewide.

- Point your gun in a safe direction.
- Treat every gun as if it were loaded.
- Be sure of your target and beyond.
- Keep your finger off the trigger until ready to shoot.
- Remember to wear Hunter Orange.

To subscribe to New York Big Game, DEC’s email outlet for information on black bear and white-tailed deer in the state, visit http://lists.dec.state.ny.us/mailman/listinfo/nybiggame .
Subscribers to this email list will periodically receive information from DEC about bear and deer biology, management, research, regulations and hunting.

For specific descriptions of regulations and open areas, hunters should refer to the 2009-10 Hunting and Trapping Regulations Guide. The guide is published annually and is available free of charge from all DEC regional wildlife offices, all license issuing agents and on the DEC website. Hunters are urged to review all regulations and safety tips contained in the guide.
Posted by KGT (aka Cagey) at 11:19 No comments:

Charlie helped us have a great hunt to celebrate Veteran's Day again this year at Whispering Pines Hideaway Shooting Preserve. The pictures tell the story. 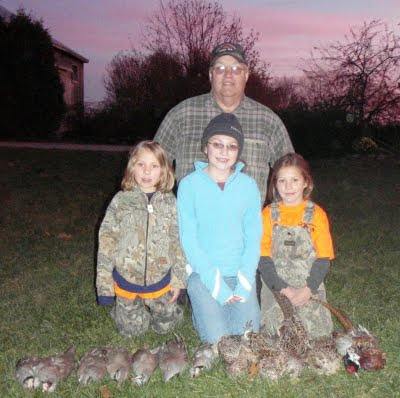 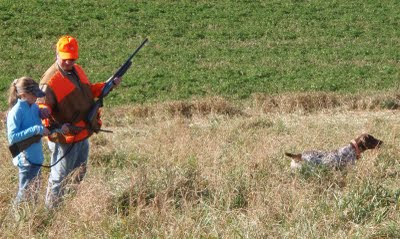 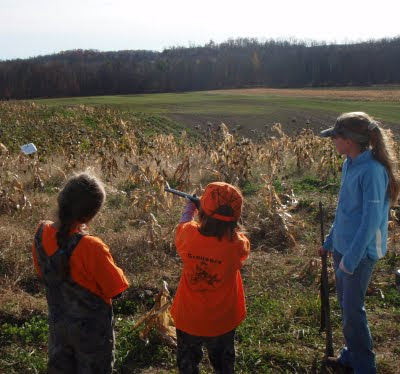 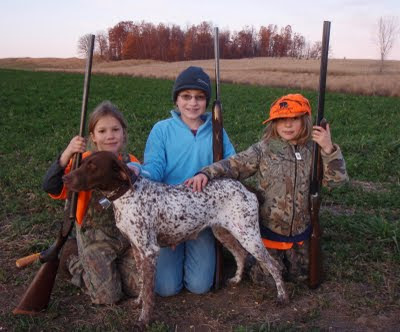