When the club started the youth shooting program two years ago it was decided that there would be a youth TOP GUN  title. The title is awarded each year to the youth shooter with the highest score for the year. The 2011 TOP GUN was Brad Sandroni and Luke Allen is the 2012 TOP GUN. 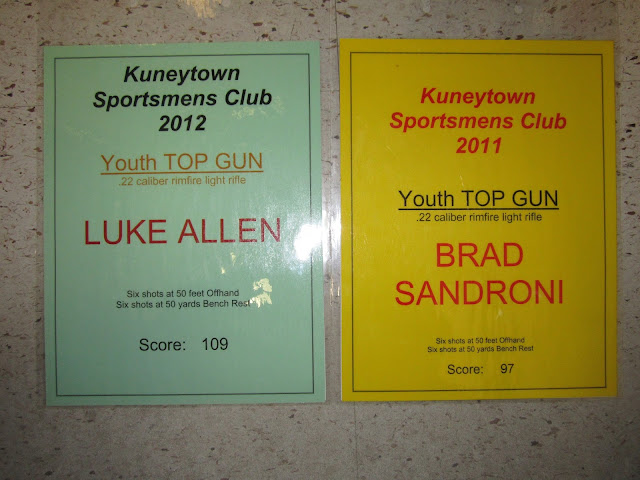 In order to qualify, the shooter needs to be no older than 17 years of age at the time they shoot.
There are Kuneytown Sportsmens Club Official .22 caliber rim fire rifle Youth Shoot Targets in the range shed.
Shooting is six shots off hand at 50 feet and six shots any position ( sitting, kneeling, prone, or bench rest) at 50 yards.  Once the target is shot  it gets posted on the Youth Shoot Top Gun leader board located in the range shed. If someone scores higher than the target posted, the higher score gets placed over that target and becomes the new leader. At the end of the year whoever has the highest score is named the Youth Top Gun. That person is given a laminated certificate with their actual target on the back while another laminated certificate is on display inside the range shed for years to come.
These shoots can be done at any time during the year but do require a club member to be present. So take a youth shooting at the club range. They could be the 2013 YOUTH TOP GUN.


How about we start a Kuneytown Sportsmens Club TOP GUN open to all members in say .22 rimfire rifle and pistol for starters? If  interested leave a yes comment on this post.


At the most recent Board of Directors meeting, it was agreed that the membership of Kuneytown Sportsmen’s Club should be reminded of rules and regulations for members, specifically the following, from the Club By-Laws:

Any member whose conduct shall in the opinion of the Board of Directors of the club be considered detrimental to the welfare of the association may be expelled from membership by vote of 2/3 of the certificate members in good standing after due notice to such member(s) and the giving to him/her of an opportunity to be heard.

Thank you for your continued support, patronage, and membership of Kuneytown Sportsmen’s Club. The club provided chili and squirrel stew for all those who showed up at the weigh in and it was good.

Watch this site as the club has plans of  scheduling one or two additional derbies before the season ends. We  also plan on adding lunker rabbit  to the derby. The club THANKS all those who participated in the derby. Special thanks to Bob Stuck, Scott Ridley and Tom Grasek for running it, as well as the three young ladies that helped with the weigh in.
Posted by TGkuney at 12:21 1 comment: 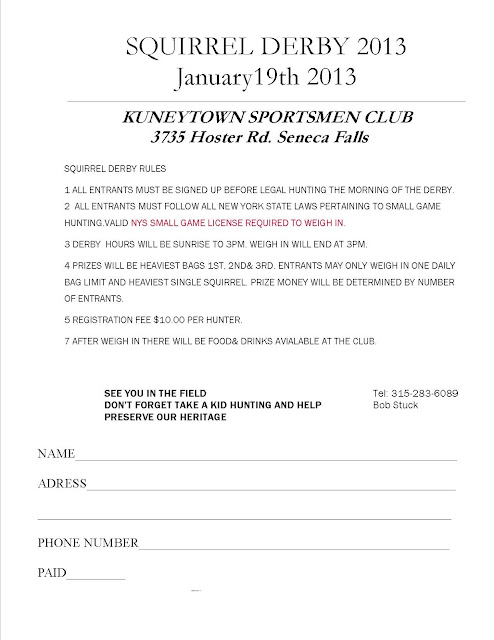 The results for the 2012 Kuneytown Big Buck challenge are in.  Three bucks were entered this year, though K-town members did harvest other bucks that were not entered.  We will add pictures of bucks to this post as they come in.

Congratulations to all of our hunters!!
Posted by KGT (aka Cagey) at 12:03 No comments: