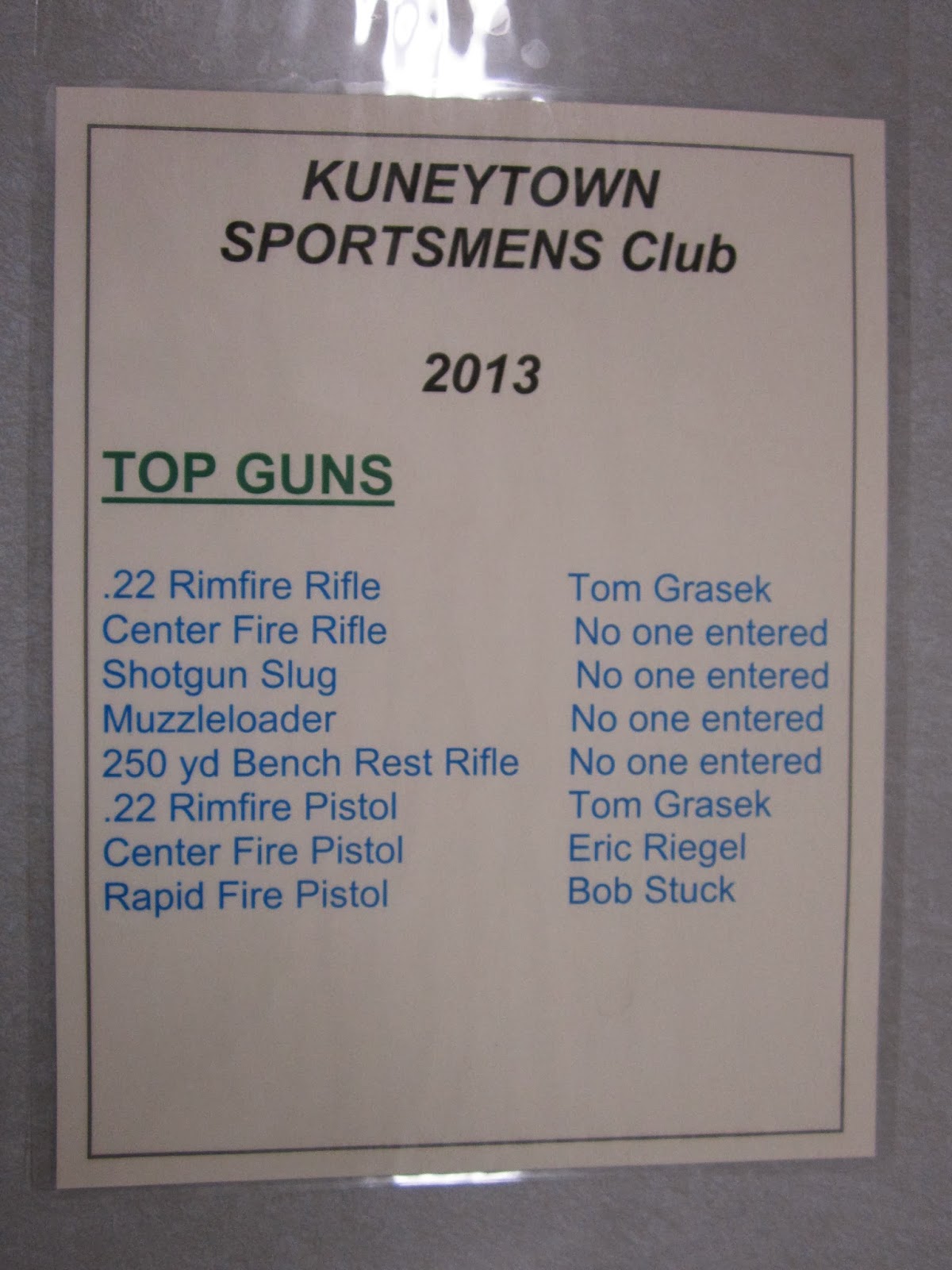 The first years winners of the Kuneytown TOP GUN competition are:

The TOP GUN leader board has been set up inside the range shed. Also inside the shed are the official targets along with the general rules and the specific rules for each shooting category.
There are eight categories. :

.22 rimfire rifle, .22 rimfire pistol, center fire rifle, center fire pistol, rapid fire pistol, muzzle loader rifle, shotgun slug and 250 yard bench rest rifle.
The General rules are:
No entry fee.  Only club members. Using the official club targets, supplied by the club.
Highest score wins, ties will require a shoot off.
There is no limit to the amount of times you shoot, they may be done anytime during the calendar year. A witness to the score is helpful but not required. (we believe that all members are honest) The timed shoots will require another person to be the time keeper.
Any sighting devices are allowed except those that project an image onto the target. (No laser sites).
The TOP GUN leader board is inside the range shed, if you shoot a higher score than what is posted put your target over it as the new leader.
Persons who are determined to be the TOP GUN in each category at the end of the year will have their name placed on that year's TOP GUN certificate and it will be displayed in the range shed for years to come.
So lets get out there and shoot. Who knows you could be one of the 2014 Kuneytown TOP GUNS.

In order to encourage participation in the TOP GUN program there will be some scheduled TOP GUN shoots when it gets warmer dates and categories will be announced. 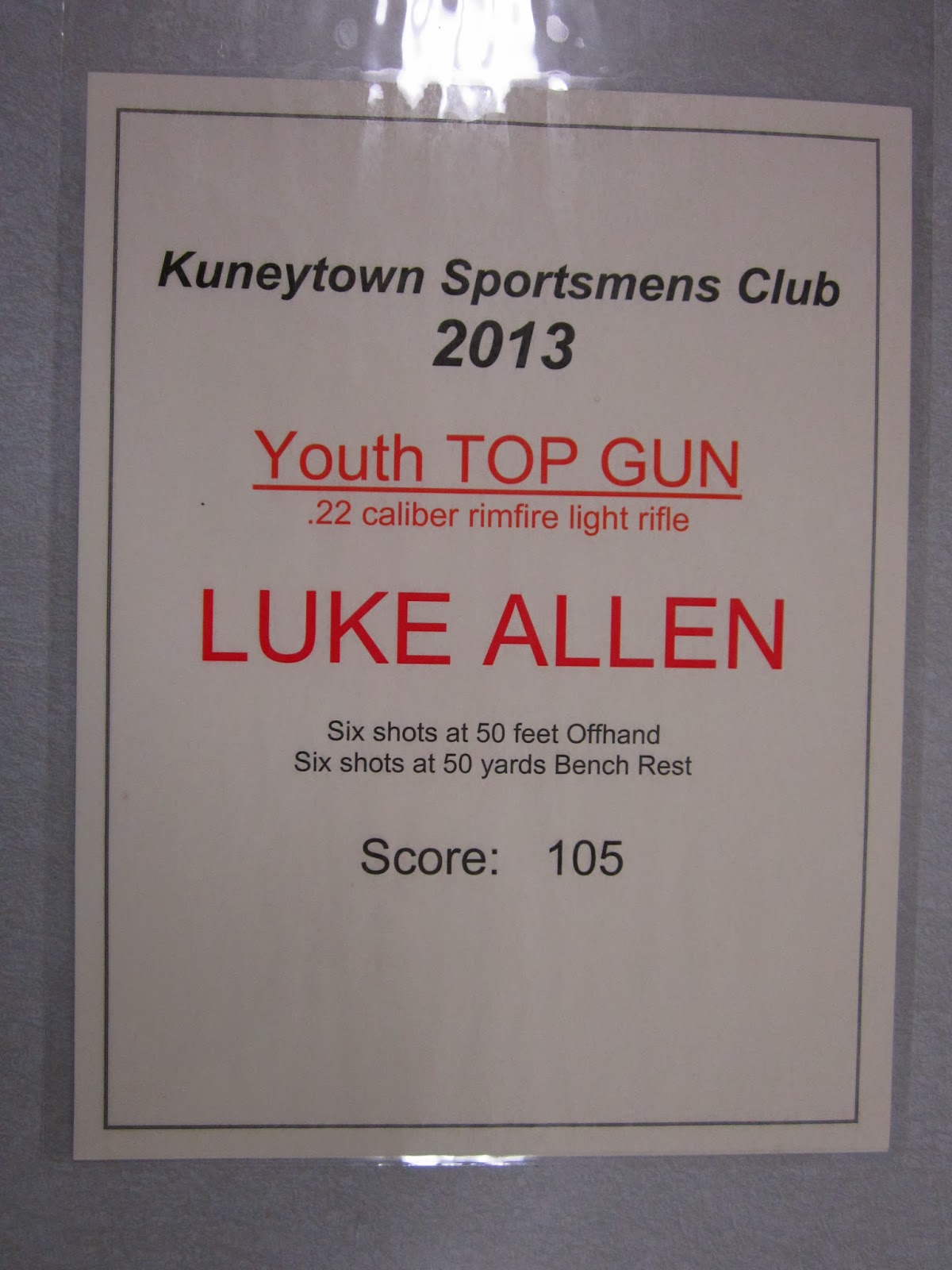 In order to qualify, for the youth TOP GUN, the shooter needs to be no older than 17 years of age at the time they shoot.  There are Kuneytown Sportsmens Club Official .22 caliber rim fire rifle Youth Shoot Targets in the range shed.
Shooting is six shots off hand at 50 feet and six shots any position ( sitting, kneeling, prone, or bench rest) at 50 yards.  Once the target is shot  it gets posted on the Youth Shoot Top Gun leader board located in the range shed. If someone scores higher than the target posted, the higher score gets placed over that target and becomes the new leader. At the end of the year whoever has the highest score is named the Youth Top Gun. That person is given a laminated certificate with their actual target on the back while another laminated certificate is on display inside the range shed for years to come.
These shoots can be done at any time during the year but do require a club member to be present. So take a youth shooting at the club range. They could be the 2014 YOUTH TOP GUN.

The club also awarded a Bass Pro gift card to the youth with the heaviest bag Damond Flectcher  5 squirrels 6.49 pounds.

The club also collected the squirrel tails and will be sending them to Mepps lures at the end of the season. The club provided chili and squirrel stew to warm up all those who showed up at the weigh in and a good time was had by all. Thanks to all those who ran the event and see you at the next one scheduled for February 9th.
Posted by TGkuney at 12:24 No comments:

The results are in for the Kuneytown 2013 Big Buck Challenge.  This year, the scoring was done differently and there were more categories. There will be a celebration dinner (time and date to be determined - watch for announcements) where prizes will be handed out.

In the "Gun" category:

In the "Archery" category:

In the "Youth" category