The third summer of the Wednesday evening youth shooting program ended. We had 12 participants who all had the opportunity to shoot trap, 22 rimfire rifle and a center fire rifle if they chose to.
This year we added the NRA Hunter Marksmanship qualification program, so there were two NRA categories that the youngsters could qualify for.
Here are the results of those shoots:

The shoots always ended with some fun shooting. Here is a quick description of those shoots.

Drag racing: One on one. The person that shoots their rubber ball first across the finish line wins.

Soccer:  Two teams of two shooters try to shoot their rubber ball into the goal before running out of ammo and before the other team. This required some strategy as shooters can play defense.

Wooden pegs: Everyone shoots at the numerous wooden pegs until none are left or you are out of ammo. Pieces of wood flying everywhere.

The T :  Everyone shoots at a wooden T  that is weighted with water jugs one shooter at a time until the wood is shot up enough and that the weight of the water jugs cause it to snap and fall down.

Water jugs:  Everyone blasts away at the water filled plastic jugs until none are left.

If you were there I am sure you had an explosively good time.

Thanks to all the adults who showed up and helped . Tom Grasek

OCTOBER 27th is the Turkey shoot.  There will be a youth .22 rifle shoot free and we supply the ammo. So bring your children down and shoot. 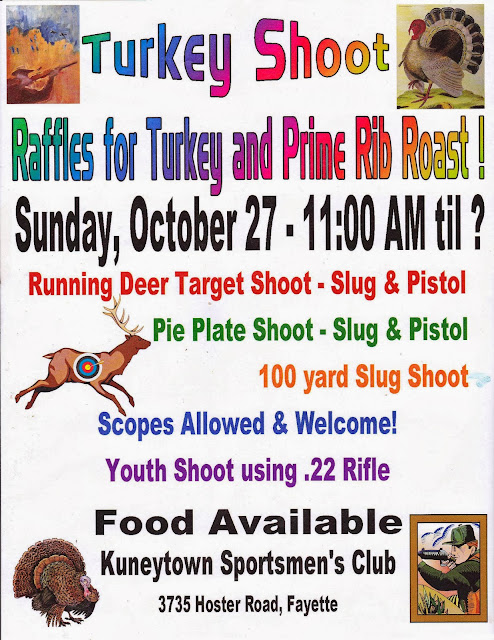