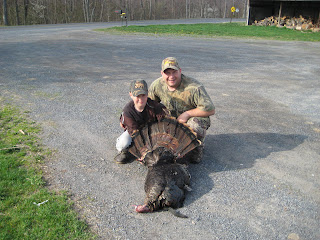 Memory For A Lifetime
Alex Karlsen, who is 13 years old, became a man on 26 April 2009. He and I (John Presnar) went turkey hunting during the youth weekend. On the first day we hunted very hard and came up empty handed. Well not completely empty, we did take in a few learning experiences: gun safety, how to use a call, and enjoy Mother Nature. Alex's persistence and dedication inspired him to awake at O' dark thirty again on Sunday. We were in the woods and heard our first gobble at 5:40 AM. Shortly after a nice tom flew down off of his roost at 5:50 AM and came right to us. He stopped about 60 yards out. He started to strut and gobble; giving us a wonderful display that made our hearts pound. Just then two more turkeys flew down and he went right for them, leaving us with despair. We decided to sit and wait a while for another opportunity. At 6:15 AM, I decided to give a nice soft yelp with my box call. Instantly after the last note, a turkey sounded off with a gobble that you felt the vibration run down through your body. I told Alex to get ready this tom is coming in. Just then we see two big toms coming right for us. They were in full strut spitting and hissing. After the one ran off the other he turned and came right into us. With nice soft purrs from my call put the big tom at ease. When he got thirty yards away and I told Alex to shoot. He shot and rolled the turkey. As we started to celebrate the turkey got up and started to walk off. I told Alex to shoot again and he did; hitting the bird with a lethal shot. Then the real celebration began with a few high fives and man to man hand shake. Alex got his first turkey!
The turkey stats were: 10" Beard, 1 1/2" Spurs, and weighed 27 pounds.
Posted by Puddle Pirate at 08:38 3 comments:

Time to get that boat going and go fishing!

Please email Keith so you can post your own highlights of your fishing exploits on this blog. We want members of Kuneytown to post!