The second squirrel / rabbit hunt of the season took place January 31st. It was a very cold day with about four inches of fresh snow on top of the 5-6 inches of snow on the ground. The temperature ranged from 3 to 18 degrees.
There were 27 people signed up for squirrel and four for rabbit.
Eleven people weighed in 50 squirrels with five of them bagging their limit.
One person weighed in 4 rabbits. Here are the results:

The club provided squirrel stew, and chili for all those who showed up at the weigh in.
There is one more hunt scheduled.  It will be held on the last day of the season Saturday February 28th. So mark your calenders and see you then.
Posted by TGkuney at 19:47 No comments:

The first squirrel / rabbit hunt of the season took place January 10th. It was a cold day with about two inches of snow on the ground. The temperature ranged from 9 to 22 degrees.
There were 30 people signed up for squirrel and nine for rabbit.
Eleven people weighed in 47 squirrels with seven of them bagging their limit.
Five people weighed in 10 rabbits. Here are the results:

The club is once again collecting squirrel tails and will be sending them to Mepps lures.
The club provided squirrel stew, turkey soup and corn bread for all those who showed up at the weigh in.
There are two more hunts scheduled.  The next one will be Saturday January 31st and the third and final one will be on the last day of the season Saturday February 28th. So mark your calenders and see you then.
Posted by TGkuney at 19:13 No comments: 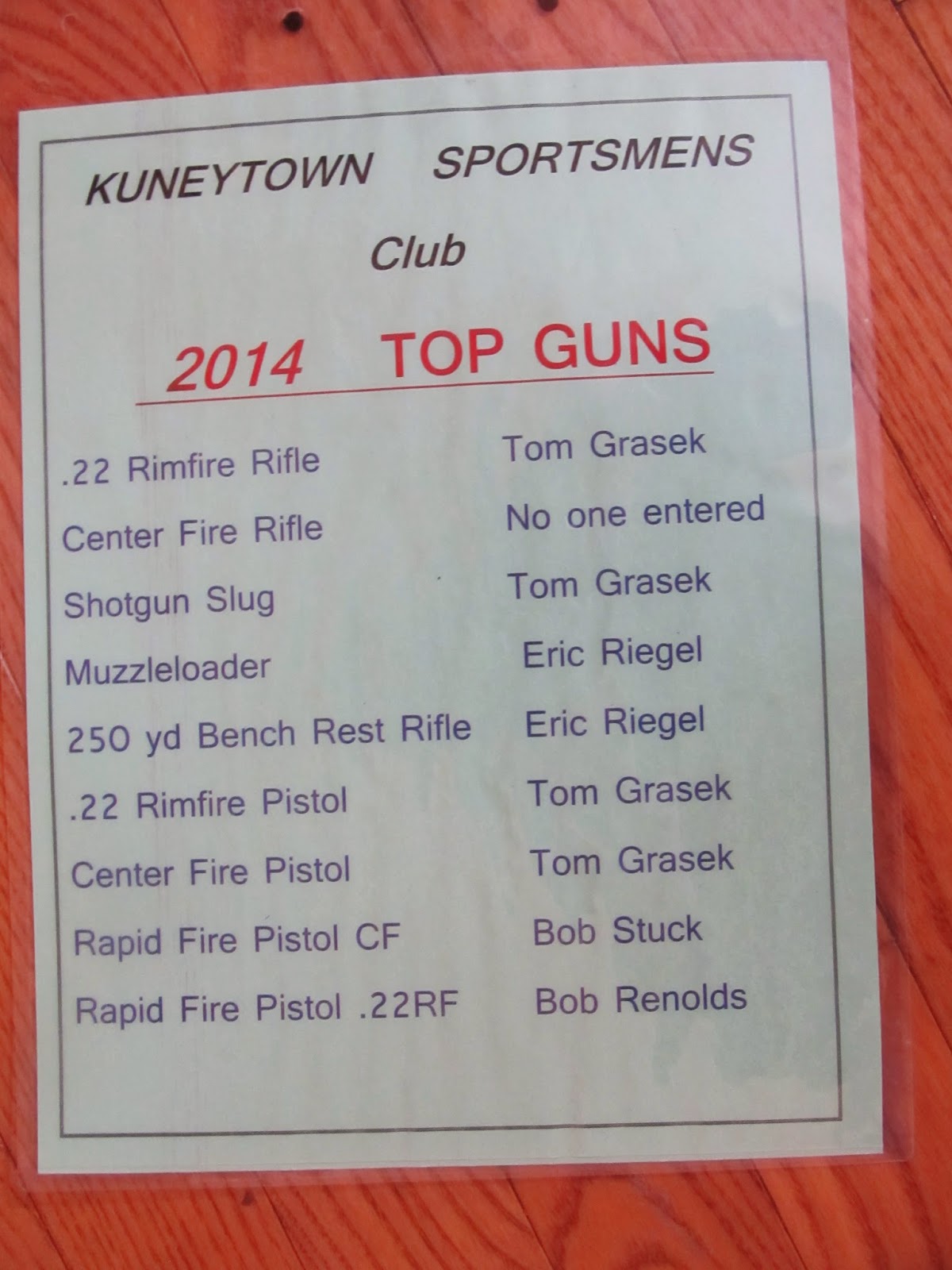 The 2014 winners of the Kuneytown TOP GUN competition are:

The TOP GUN leader board has been set up inside the range shed. Also inside the shed are the official targets along with the general rules and the specific rules for each shooting category.
There are nine categories. :

.22 rimfire rifle, .22 rimfire pistol, center fire rifle, center fire pistol, rapid fire pistol (Center fire and .22 rimfire), muzzle loader rifle, shotgun slug and 250 yard bench rest rifle.
The General rules are:
No entry fee.  Only club members. Using the official club targets supplied by the club.
Highest score wins. Ties will require a shoot off.
There is no limit to the amount of times you shoot. They may be done anytime during the calendar year. A witness to the score is helpful but not required. (we believe that all members are honest) The timed shoots will require another person to be the timekeeper.
Any sighting devices are allowed except those that project an image onto the target. (No laser sites).
The TOP GUN leader board is inside the range shed. If you shoot a higher score than what is posted, put your target over it as the new leader.
Persons who are determined to be the TOP GUN in each category at the end of the year will have their name placed on that year's TOP GUN certificate and it will be displayed in the range shed for years to come.
So let's get out there and shoot. Who knows?  You could be one of the 2015 Kuneytown TOP GUNS.

In order to encourage participation in the TOP GUN program, there will be some scheduled TOP GUN shoots when it gets warmer. Dates and categories will be announced.